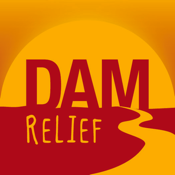 History
In 2008, Sam Ward and Max Bilbow, with the cooperation of many others, produced a movie called A Dam Shame.

The film, with its positive message about the fun, love and beauty of the area, was watched by 1000s of kayakers and succeeded in raising awareness (and thus increasing business) for companies like Kayak The Nile, Love it Live it and rafting companies that provide services for the film's audience.

The Problem
However once the dam was completed, the prevailing message that spread through magazine articles and social media was that the White Nile was now dead and gone; lives changed [ruined] forever.

But anyone in Jinja knows that this is simply not the case. The river is still here and now there is a beautiful new lake with even more activities popping up; not to mention the vast number of Ugandans that now benefit from employment at the dam and other new projects.

Not one safety kayaker or raft guide lost their job!
The Mission
So Max and Sam were going to make a sequel to A Dam Shame called A Dam Relief; a film that focusses on the amazing whitewater, and other activities and opportunities, that still remain - specifically the local Ugandan heroes who have achieved so much. But then we realised that we couldn't make a film that short or concise since there is SO MUCH STILL THERE!

So A Dam Relief will only be the climax of an enormous co-operative media campaign that will dispel all the misinformation floating around with regards to Uganda: Kidnappings, pirates, war, hate, muggings.... we hear this in the news, Yes. But not in Uganda and DEFINITELY not at Bujagali, Jinja.

A Dam Relief will be creative media project, officially beginning in May this year and culminating in October during the Nile River Festival and Uganda’s 50th anniversary of independence.

It will be an umbrella for responsible sustainable tourism in Jinja and spreading to other parts of Uganda as well.

While the production team are in Jinja, they will make many short videos (promotions, humorous sketches, stories, documentaries) for individuals, companies and just for fun. And this is not a project to show off western kayakers and fim makers - Ugandans will be, and already are, heavily involved in the ideas and productions. The chief of Bujagali Village and the Jinja police are intrigued by this project and how it can benefit their beautiful and beloved town.

Uganda is alive, vibrant, growing, safe and full of fun. Even if all you do here as a tourist is enjoy yourself at the bar, you are making lives better for Ugandans. Sustainable tourism, dams aren’t always bad, come to Uganda!

A Dam Relief will be a megaphone for the right ideas - the good ideas - and we will all benefit.

How can I help?
There are many things you can do but the first is simple: Watch, listen and talk; spread the word. Like the Facebook page and updates will arrive when they are ready: facebook.com/aDamRelief

The next big thing, and this is huge: COME TO UGANDA! Come this summer and be a part of the legacy we're creating. Kayak, raft, bungee jump, ride a horse, drive a quad-bike, get in a jet-boat, SUP, help build a school with Soft Power, drink, eat and love.

But basically: know that this is happening. See you there!