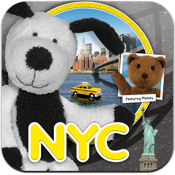 Children’s Travel Guides based on stuffed animals traveling around the world, city by city


Cooper lands in the Big Apple to see his old friend, Phinney the Bear. Phinney takes Cooper throughout NYC to see the sights and learns why New York City is the greatest city in America. Their travels include Times Square, Central Park, Top of the Rock, a River Cruise, the American Museum of Natural History, Grand Central Terminal and several famous landmarks in between.

The Cooper’s Pack New York City title includes over 500 images and graphics, along with reference maps, animations and fun facts. The storyline reflects a tourist’s point of view when visiting NYC for the first time. In addition, there are over 150 “Buried Bones” hidden throughout the book featuring travel tips, Cooper’s friends, silliness and fun. The New York City release also includes user-activated animations within the story.

By combining the rich imagery used in the print version of the books with an interactive “Where’s Waldo” type feature to see what Cooper hid within the story, readers are guaranteed to enjoy their journey. Perfect for kids ages 5-12 and adults who like to encourage and teach travel awareness and exploration.

Each Cooper’s Pack Children’s Travel Guide series follows the journey of the main character Cooper, an adventurous stuffed dog, throughout the world’s most famous cities with a local friend (a member of his “pack”). The books also include an interactive education and activity section and hidden secrets called “buried bones”.

See the full catalog at: www.cooperspack.com

Gift this app! - Click the “Buy App” arrow on the iTunes(r) App Store.