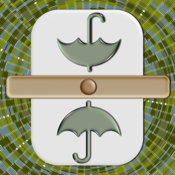 MatchDuo is a two-player game, requiring reflexes and speed.
The game goal is very simple, and allows children to play from 4 years and up.
Only two screen touches are needed to start a game.
Three games and six sets of objects and symbols offer varying difficulties.
Although MatchDuo is primarily designed for two players, it is possible to play in the "Solo" mode against one of the three AI players of various strength.

Each player receives 18 tiles featuring various objects, signs or symbols, picked from one of six sets. Each tile is different from all the others.
Game 1: tiles are displayed randomly at the center of the screen ; touch and clear the matching tile in your game. This game is the best suited for very young kids.
Game 2: touch and clear the tiles you have in common with your opponent.
Game 3: touch and clear tiles which differ from those of your opponent.
Naturally, to win, you need to play faster than your opponent, while making the least possible errors.

The "Geometric figures" set is the easiest to play because the tiles are symmetrical (the tiles of each pair are visually similar for both players), but of very distinct shapes.
The "Stars" set is composed of symmetrical tiles, but each one being very similar to each other.
The "Animals", "Symbols," "Letters" and "Objects" sets are composed of distinctive tiles, but the tiles of each pair are arranged "head to tail." Therefore, the games using these sets require good spatial representation skills.