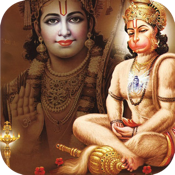 Hanuman Chalisa praises Lord Hanuman the Foremost Devotee of Lord Shri Rama. Shri Hanuman is the epitome of Selfless Service, Courage, Humble disposition, and Bhakti all rolled into one. Venerating that noble Devotee of Raamaa is sure to benefit us. I have found that specific verses in the Hanuman Chalisa are capable of bestowing specific results as a result of my meditations on this for long years (based on my individual research; and I have found it to be working miraculously by God's Grace).

1)Verses in English with its meaning

With the sacred sand of Guru's Lotus feet, I clean the mirror of my mind and then narrate the sacred glory of Sri Ram Chandra, The Supreme among the Raghu dynasty. The giver of the four attainments of life.

3)Gallery
-Have really amazing Deity Photos in cover flow patter which can be downloaded in photo library and used as wallpaper and as screen saver.