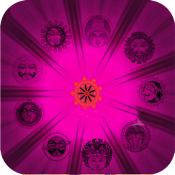 Chalisa - forty verses of lyrics. Verses that praise and plead with devotion. They are recited over and over again or chanted by groups ... even in the cane and rice fields by early indentured laborers ... or sung quietly in private temples in many homes. Each is directed to a deity ... there are as many dieties as their are virtous deeds and acts ... whose acts and deeds are recalled in the verses to aid the devotee to meditate on righteous and noble qualities.Chalisas have been in existence since the emergence of the human race.

1)Verses in English with its meaning

The radiance of your light is limitless and all pervading and all the three realms(Earth, Heaven And the Nether World) are enlightened by Thee

3)Gallery
-Have really amazing Deity Photos in cover flow patter which can be downloaded in photo library and used as wallpaper and as screen saver.

Benefits of Listening or Chanting Navagraha Chalisa:-
1.Surya (The Sun): The Sun is the most powerful living God who bestows you with good health and prosperity
2.Chandra (The Moon): Moon is the planet, who rules your mind and brings success. The Moon, at the time of your birth is found in a particular star, and that will be considered your Moon Sign.
3.Kuja (Mars): Mars showers your prosperity and wealth.
4.Bhudh (Mercury): Mercury is the planet of knowledge. He bestows you with wisdom and wealth and is ruled over by Lord Maha Vishnu.
5.Guru (Jupiter): Jupiter blesses you with education and knowledge. He cures you from ailments and cleanses your negative emotions.
6.Shukra (Venus): Venus showers the knowledge of art and music. He is the bestower of long life, wealth, happiness, children, property and good education. He is ruled by Goddess Lakshmi.
7.Shani (Saturn): Saturn ensures happiness. He is known to affect you adversely on occasions when he occupies certain positions in your horoscope. A prayer to him, especially on Saturdays, is said to mitigate your hardships. He is ruled by Lord Yama.
8.Rahu (Ascending node of the Moon): Rahu makes your life stronger. He is instrumental in strengthening your power and converting even any enemy into your friend.
9.Ketu (Descending node of the Moon): Ketu brings prosperity and negates bad effects, illnesses etc. He grants you good health, wealth and all round prosperity.