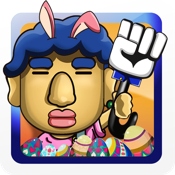 Different bosses will appear in the secret stage of full version!

The big nose tribe, a saint-like people embodying the philosophy of no desires, has lived happily and dutifully maintained the holiness of their sacred land.

Until one day came the evil wizard – “C”, who is hell bent in destroying this peace by corrupting the heir of the tribe… Prince X. With his soul possessed by the wizard and with his greed evoked, Prince X not only ran away with all of his father’s wealth, but was also driven mad by the wizard’s spell.

As leader of his people and to rescue his son, King W has picked up the “Hammer of Awakening” and set forth upon his quest: To chase his son to the edges of the world and save his soul.

Playing as King W, you will chase after your son around the world and whack your son’s mind back to normal through completing various whack-a-mole levels
As Prince X now possesses the evil wizard’s magic, evils across the world has rallied behind him, posing extra challenges in this whack a mole game. His minions possess unique abilities:
-soldiers: twice the amount of health, and will attack back
-ninja: create illusions of self to confuse you
-supermen X: control and alter weather
-zombies: bites back when raised from the dead (In full version only)
-many more challenges *in full version* awaiting for players to discover


Game characteristics:
-aside from attacking the minions, the minions will fight back!
-minions adapt various appearances, representing different regions of the world
-a rich storyline for players to immerse into
-generals, ninjas, supermen and zombies (in full version only) all sorts of characters from the popular culture included in this game
-challenging players’ reaction, observation and logic
-and experience a touching story between a father and son