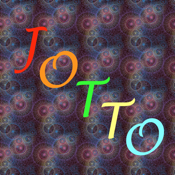 Jotto is based on a parlor game from the 1950's in which each person would think of a secret word and others would in turn make guesses. The person with the secret would then say how many letters in the guessed word were in the secret. By choosing different words players could identify or eliminate letters until they could guess the secret. Play would continue until only one person's word was unguessed. That person would be declared the winner.

In this version the computer has a secret you are trying to guess. Simply enter a word by selecting letters in the keypad and press (GO) to make your guess. If you mis-type a letter you can use the BACK key "<" to backup and re-enter a letter. You may also tap the letter position and enter the next letter. There is no time limit, or maximum number of guesses. The secret word is always a word without any repeated letters, such as QUIET, but not QUEEN which has two "E"s. All guess words must be proper English words.

If you enter many guesses, your list of guessed words will scroll, showing the most recent words at the top of the list. There are also options which you can set to make the game easier or more difficult. If a particular secret is giving you trouble, you can always press the (Give Up) button to end the current game, and try a different secret word.

Unique Guesses - requires that guess words have no repeated letters. A guess such as QUIET is OK, but QUEEN is not because it has more than one "E". This makes the guessing more difficult.

Exact Match - requires you to figure out the correct word when the available letters could spell more than one word. For example, if you have the letters: A E K S T, you could spell STEAK, STAKE or SKATE. Only one of these is correct. If Exact Match is OFF, then if you enter any of these the game will give you credit for guessing the secret because you discovered all of the correct letters.

Computer Assist - enables the computer to help you guess by turning the letters on the keypad GREEN or RED to indicate whether a letter is known to be in the secret or not. Letters that have not been used will remain WHITE and letters guessed, but unable to be determined will be LIGHT BLUE. The computer is only allowed to consider information presented in the guess log. Disabling this feature means you have to figure out which letters to include or exclude all by yourself.

Sound Effects - enables playing sound effects for feedback on your progress while playing the game.

Automatic Go - enables the game to accept your guess immediately when you enter the last letter of the guess word instead of waiting until you have pressed the (GO) button. This feature helps speed up the game.

Key Image - displays the current image for the alphabetical keys.  The game now comes with a set of additional light and dark keys from several models of manual typewriters.  The keys now also sound like typing on a typewriter.  Use the stepper next to the key image to cycle through the available keys.

Enjoy the Game and submit a rating after you have played it awhile.