Are You Smarter Than Your Attending? 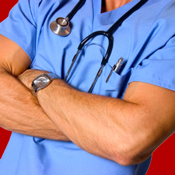 So you really think you’re that smart? On July 8, 2012, you’ll have a chance to prove it! This is a seriously difficult contest, but you could win some pretty serious stuff (for a Cardiothoracic Surgeon, that is). This contest is brought to you by CVOffice with the unbelievably generous cooperation of the American Association for Thoracic Surgery. Apple, Inc., has nothing to do with this contest: no sponsorship, no involvement, no nothin’.

Here’s how it works. First of all, READ THE INSTRUCTIONS! Don’t be an idiot, thinking you already know how the app works - you don’t! Get to know the app using the sample questions. These don’t count, but at least you can see how to make your way around the questions. Starting July 8, 2012, a set of five questions will be given to you every week. Answer those questions within two minutes. Yes, you will be timed! The faster, the better. The faster you answer, the more points awarded. You get bonus points if the question has pictures or movies associated with it. If you answer incorrectly, guess how many points you get: zilch, nada, goose egg.

After you complete the week’s set of five questions, you will be given an opportunity to upload your scores to Game Center. This is the only way you can play to win, so make sure you’re connected to the internet by cellular or wi-fi and make sure you are signed into your Game Center account. At the end of the ten week contest, CVOffice will contact the top three scorers via Game Center heaping praise and admiration upon those big-brained uber surgeons. The AATS will also be contacting you for prizes like free journal subscriptions and free meeting tuitions. How cool is that?

The contest closes on September 15, 2012, at midnight Central Daylight Time (UTC/GMT -5 hours). No more scores will be counted after that time.

CVOffice had helpers for this contest. The American Board of Thoracic Surgery donated the questions. Michael Firstenberg at The Ohio State University and Ben Bidstrup down under in New South Wales, Australia, kept us honest by testing this app. The Society of Thoracic Surgeons was extremely kind by promoting the contest. And you already heard about the AATS.

So punk, are you feelin’ lucky? Well, are you? Are you smarter than your attending?