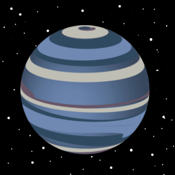 Thanks for the feedback! Version 1.1 will be submitted to Apple soon with the following:
- Fixed bugs with update feature
- Fixed incorrect temperature for Kepler Candidtates
- Fixed freezing while updating systems
- Color of orbit now determined by planet temperature
- Two new binary systems

Kepler Explorer is an exciting new application for the iPad and iPhone, allowing anyone to gain a better understanding of the faraway planetary systems found by NASA's Kepler Mission.

- Discover the potential compositions of
planets using the same formulas used by
astrophysicists, presented in a way
anyone can use!

- Compare and contrast these far-away
systems with our own solar system!

- View the relative scales of each planet
to its parent star.

- Speed up and slow down the rate of time
and pinch to zoom in and out while
interacting with the orbits of each
system!

OpenLab is a new research initiative at the University of California, Santa Cruz, that aims to strengthen collaboration between the arts and sciences. This application was a collaboration of the Department of Astronomy & Astrophysics, The Digital Arts and New Media Program, OpenLab Research, game developer John Peters, and astrophysicist Jonathan Fortney.