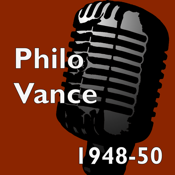 Think you’d make a pretty good detective? Listen closely and think fast and you might, in fact, be able to name the killer before Philo Vance. His creator, S. S. Van Dine, once listed “Twenty Rules for Writing Detective Stories.” The first two rules:

1. The reader must have equal opportunity with the detective for solving the mystery. All clues must be plainly stated and described.

2. No willful tricks or deceptions may be placed on the reader other than those played legitimately by the criminal on the detective himself.

In short, crime fiction is a game where you’ve got to play fair. Which is why his “Philo Vance” series continues to please: all the clues are visible to you as well as to Vance, and there’s a pretty good chance—if you don’t get distracted—that you’ll figure out who-done-it before the culprit is nabbed.

Test you wits for days with this criminally entertaining collection.


About the series: The Philo Vance of film and radio wasn’t quite the same character as the one found in S. S. Van Dine’s stories. This was actually a good thing. The man introduced in “The Benson Murder Case” was an irritating dilettante, prone to Latin quotations and impromptu dissertations on Chinese ceramics, Egyptology, classical music, and Renaissance art. Plus an expert polo player, dog breeder, archer, and golfer.

When Philo Vance was eventually picked up for film, producers kept the clever Van Dine plots but retooled the lead’s personality. To get a sense of the improvement, he was first played by William Powell in what wound up as a warm-up for his Nick Charles “Thin Man” persona.

The first radio Vance, in 1945, was played by José Ferrer. Few of those episodes have survived. But most of the 1948-50 run is available, and Jackson Beck’s approach to Vance works very well: he sounds incisive but not curt, smart but not superior, and his learning is always worn lightly. Just the kind of guy you’d want solving your murder.

If the voice is vaguely familiar, it’s due to Beck’s lifetime of work in radio and the movies, from announcing the orignal “Adventures of Superman” to playing Bluto in the “Popeye” cartoons and narrating sketches on “Saturday Night Live.”