The Keep of the Lich-Lord 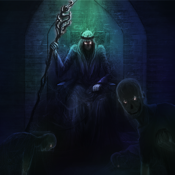 Based on a "Fighting Fantasy" title, the Keep of the Lich-Lord is an exciting 2D RPG designed by Megara Entertainment (Fabled Lands iOS apps) and legendary authors Dave Morris (Golden Dragon, Dragon Warriors) and Jamie Thomson (Way of the Tiger).

I have been a huge fan of the electronic “RPG novel” genre. This latest variant is actually based on the Fighting Fantasy book of the same name. This update to the classic novel has been lovingly crafted by the folks that produced the iOS version of the Fabled Lands gamebooks. More than a reprint, the iOS version contains new twists and turns to the original story. It also employs the same rules and battle system that exists in the Fabled Lands apps. An epic score, immersive sound effects and hand drawn, hi-res art bring the world to life. Welcome to the new age of interactive fiction.

The story is well written and fits perfectly within the gamebook genre! Much of the artwork is beautifully rendered.

Vognar Keep has fallen to a deadly foe. The safety of the northern continent of the Fabled Lands is threatened once more by the forces of Evil! After two centuries of peace the dark necromancer, Lord Nydaedus of Hagor, has returned from the grave to rekindle the flames of war with his own legions of foul undead warriors.
YOU are a mercenary, battle hardened and cunning. You will need all your skills if you are to penetrate Vognar Keep and destroy the threat to the land.
Many dangers lie ahead and your success is by no means certain. Powerful adversaries are ranged against you, and it's up to YOU to decide which route to follow, which dangers to risk and which foes to fight!

* Fantasy 2D RPG/Gamebook gameplay
* New story twists - not simply a re-print of the Keep of the Lich-Lord Fighting Fantasy gamebook
* Almost a hundred high resolution colour artworks, animated and optimized for your iPhone or iPod Touch
* Collect rare magical items for your inventory
* Play as the Rogue or Paladin
* Rules and battle system based on our successful Fabled Lands apps by Megara Entertainment
* Wonderfully orchestrated score and immersive sound effects
* Accessible character sheet at all times during reading which auto updates
* In-game map

More reviews from our users:

"Loving this and though as a stand alone experience it's fantastic. Don't hesitate to try the Fabled Lands 1 and 2 iOS apps by Megara Entertainment. The series is so engaging and has some great gameplay that will give you many hours of fun, and enthrall you. I know it's sucked me in hook, line, and sinker. Hope they continue to release adventure games like this."

"Megara has done a great job translating this old Fighting Fantasy gamebook - they've created all new art and music to accompany this version, and are presenting it using their Fabled Lands engine. If you enjoy gamebooks, you owe it to yourself to pick this up!"

"This Fighting Fantasy port by Megara is obviously done with a lot of love and labor. It's a worthy standalone by all means. If you like gamebooks, The Keep of the Lich-Lord is not to be missed. If you've never tried a gamebook, this is a perfect place to start!"