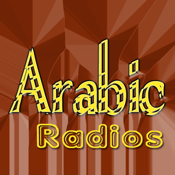 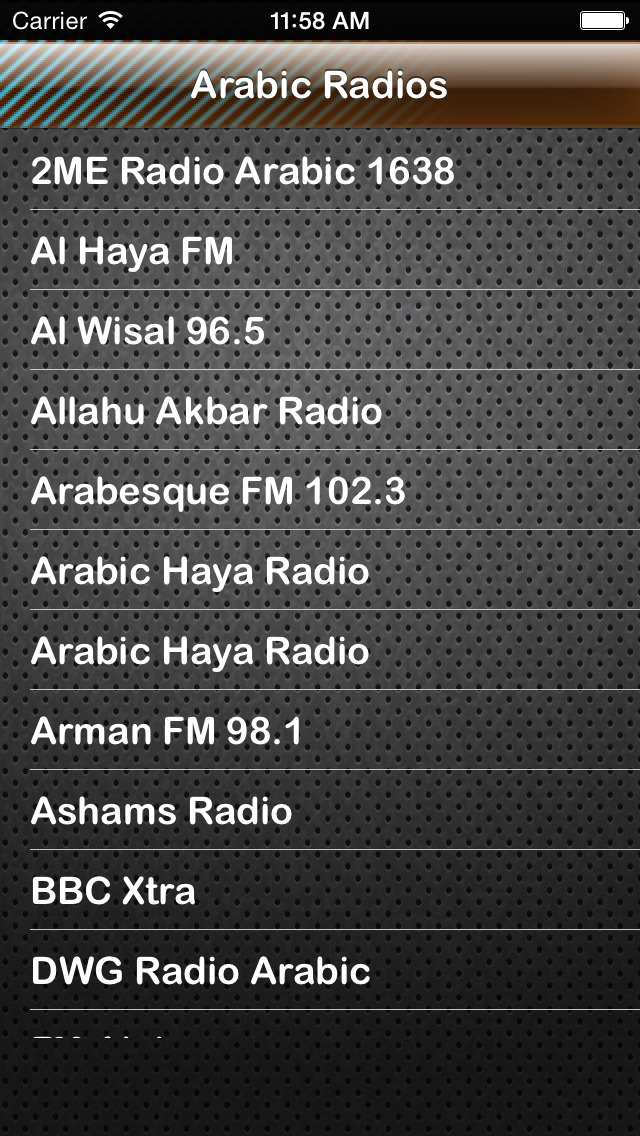 Arabic Radio app allows you to enjoy many great Arabic language radios from around the world.

- Play radios in the background

Classical Arabic is the language found in the Qur'an and used from the period of Pre-Islamic Arabia to that of the Abbasid Caliphate. Theoretically, Classical Arabic is considered normative, according to the syntactic and grammatical norms laid down by classical grammarians (such as Sibawayh), and the vocabulary defined in classical dictionaries (such as the Lisān al-Arab). In practice, however, modern authors almost never write in pure Classical Arabic, instead using a literary language with its own grammatical norms and vocabulary, commonly known as Modern Standard Arabic. This is the variety used in most current, printed Arabic publications, spoken by some of the Arabic media across North Africa and the Middle East, and understood by most educated Arabic speakers. "Literary Arabic" and "Standard Arabic" (فصحى fuṣḥā) are less strictly defined terms that may refer to Modern Standard Arabic or Classical Arabic.

No modern spoken variety of Arabic has case distinctions. As a result, MSA is generally composed without case distinctions in mind, and the proper cases added after the fact, when necessary. (Because most case endings are noted using final short vowels, which are normally left unwritten in the Arabic script, it is unnecessary to determine the proper case of most words.) The practical result of this is that MSA, like English and Mandarin Chinese, is written in a strongly determined word order, and alternative orders that were used in CA for emphasis are rare. In addition, because of the lack of case marking in the spoken varieties, most speakers are not able to consistently use the correct endings in extemporaneous speech. As a result, spoken MSA tends to drop or regularize the endings except when reading from a prepared text.

The numeral system in CA is complex and heavily tied in with the case system. This system is never used in MSA, even in the most formal of circumstances; instead, a significantly simplified system is used, approximating the system of the conservative spoken varieties.

MSA uses much Classical vocabulary (e.g., ðahaba "to go") that is not present in the spoken varieties. However, when multiple Classical synonyms are available, MSA tends to prefer words with cognates in the spoken varieties over words without cognates. In addition, MSA has borrowed or coined a large number of terms for concepts that did not exist in Quranic times (and in fact continues to evolve[5]). Some words have been borrowed from other languages, notice that transliteration mainly indicates spelling not real pronunciation (e.g., فيلم fīlm "film" or dimūqrāṭīyyah "democracy"). However, the current preference is to avoid direct borrowings, preferring to either use loan translations (e.g., far "branch", also used for the branch of a company or organization; jināḥ "wing", also used for the wing of an airplane, building, air force, etc.) or to coin new words using existing lexical resources (e.g., širkah "corporation", ištirākiyyah "socialism", both ultimately based on the verb šarika "to share, partner with"; jāmiah "university", based on jamāah "to gather, unite"; jumhūriyyah "republic", based on jumhūr "multitude"). An earlier tendency was to re-purpose older words that had fallen into disuse (e.g., هاتف hātif "telephone" < "invisible caller (in Sufism)"; jarīdah "newspaper" < "palm-leaf stalk").