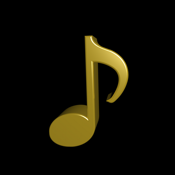 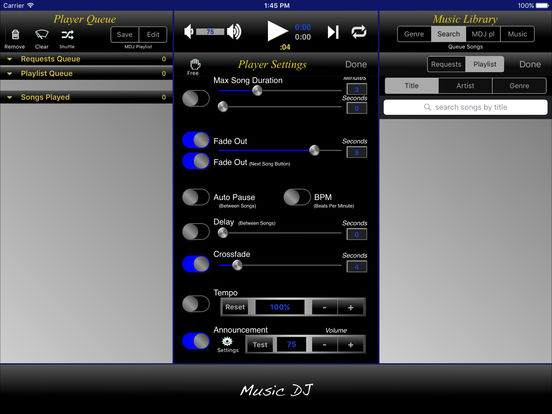 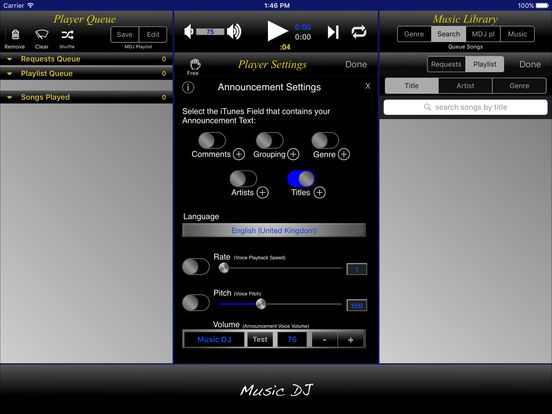 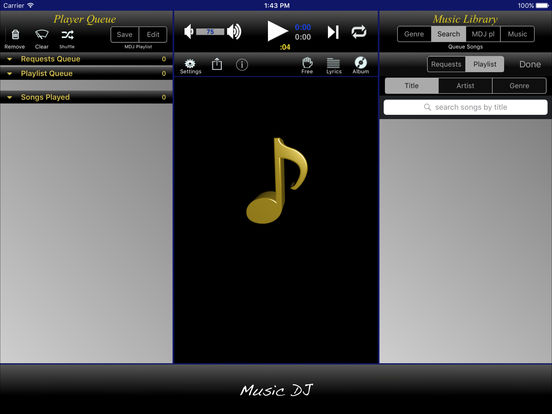 Play your music like a professional DJ! This program gives you more control and flexibility for playing your music by providing some of the most common useful DJ features. Great for parties or dance events.

Voice-over Announcement Feature. Uses the text to speech synthesizer to make voice announcements at the beginning of a song. For example, you can announce the dance type (e.g. The Electric Slide, Waltz, Cha Cha, Happy Birthday ...). You can also tweak the announcement voice to your liking.

Customize the genre picker for quicker song selection based on your iTunes genre and star ratings.

Remove Button: Allows you to selectively remove songs from any of the three lists – Requests, Playlist, or Songs Played.

Clear Button: Allows you to clear any or all of the three song list sections. Requests, Playlist, Songs Played.

Hands free Button: Simplified player interface to control music playback while minimizing the need to look at the screen. Tap to play/pause, swipe up/down to change volume, swipe right/left to move to the next/previous song in your playlist.

Lyrics Button: Displays a songs lyrics if they exist for a specific song. Time Coded Lyrics are highlighted during playback. iTunes can be used to add song lyrics to songs in a users music library.

Save: Save the current songs in Request, Playlist, or Songs Played queue to a MDJ Playlist for future use.

Queue: Add songs from a saved MDJ Playlist to your current play queue.

Play-Skip Button: Tap this button, during song play mode to skip to the next song in the playlist. Current song will fade to next song if set in user settings.

Repeat Button: Press to toggle off (button is white), repeat current song (button is blue with "1"), or repeat "Songs Played" list (button in blue) once the current "Playlist" songs have finished.

This section of the interface contains the scrollable list of songs you’ve selected from your music library. Each section contains the song count and can be hidden by tapping the title bar. Songs can be dynamically dragged and dropped to change the order of songs or to move songs from one section to another. Add or remove songs while playing.

Requests: Use this section when taking user requests. Then when you’re ready, drag and drop the song into the play order you desire.

Playlist: Order of songs to be played. Drag and drop songs to rearrange the order.

Songs Played: List of songs already played. You can move any of these songs to your playlist to replay.