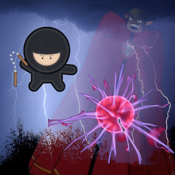 "Awesome!.. the only flaw is that it is so good that I'm having trouble getting off my ... and cleaning my room. Definitely worth downloading!" - User (App Store) Review

"One of the best ninja games since Fruit Ninja.. except this one has a great and interesting story." - Game Fanatic

Engage in a thrilling journey through various galaxies while controlling ninja Noran on his quest for justice + discover the new awesome levels in higher galaxies.

If updating, Game Center details will appear as soon as you conquer a new level. It's as simple as that + discover the new awesome levels in higher galaxies.

In a distant segment of the Pandora universe, an intergalactic war erupts between the Ninja League and the notorious Kitler, brother to the Ninja Grandmaster Kizan. Determined to avenge their master’s murder at the hands of his renegade brother, the three ninja heroes Noran, Lynn, and Xanji must journey through the seven galaxies of their universe in a desperate fight against the evil Kitler and his maniacal generals.