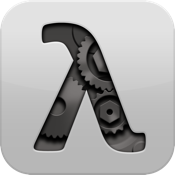 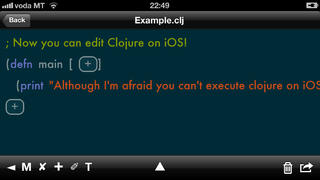 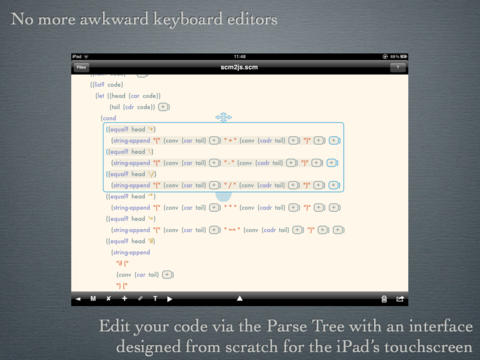 Lisping is a Lisp editor designed around the concept of editing the parse tree, an approach chosen because of its suitability to the iPod, iPad and iPhone's touchscreen interface. Currently Lisping supports Clojure and Scheme.

Anyone who has tried to edit code on the a touchscreen through a traditional textview knows that it doesn't work well. Editing source code character by character is a concept wedded to the keyboard and it is inappropriate for iOS devices, none of which have a keyboard. Lisping abandons this model and allows you to edit your code via the parse tree. Rather than manipulating ranges of characters Lisping focusses on selecting, creating and moving syntax elements, a task ideally suited to iOS's touchscreen interface.

Lisping has support for editing both Scheme and Clojure. Lisping has a built in Scheme interpreter so you can try out code on your device, but it is impossible to execute Clojure on iOS.

If you have any questions, comments or suggestions then get in contact at slidetocode@gmail.com. More information is available at our website slidetocode.com.