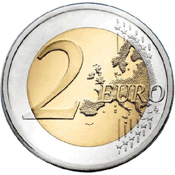 Euros are now ten years old.
In 2002, there were 12 countries who took part in creating this currency.
There are currently 20 countries that mint euros giving us over 2,000 variations!
Do you know all of them?

Euro Collec’ proposes:
- all common coins, from 1 cent to 2 euros
- all commemorative 2 € coins
- all countries which mint the European currency: Germany, Austria, Belgium, Cyprus, Spain, Estonia, Finland, France, Greece, Ireland, Italy, Luxembourg, Malta, Monaco, Netherlands, San Marino, Slovakia, Slovenia, and the Vatican
- coins description in 22 languages (see below)
- coins from each year beginning in 1999 (when the first coins were minted) until 2012
- the number of coins minted each year
- the official comment of the European Central Bank (*)
- a high-resolution image for each of these coins (over 330 images in all)

With our integrated sorting filters in Euro Collec’, finding this information (countries / years / value / commemorative coins), as well as sorting options will be a breeze.
You can also record the coins you possess and find them easily.


Information and images will be loaded on to your device as soon as the application is launched and do not require any further internet connection.

Euro Collec’ functions without any additional purchase: you will be able to update the data base free of charge when it changes.

(*) comments can be consulted free of charge on the official European Central Bank site.