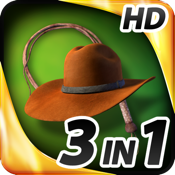 Enjoy 3 Games for ♥ 1 low price ♥!
Triple your adventure stories with this compilation of Best Sellers.

Inspired by Edgar Allan Poe’s novel.
1827 – William Legrand, son of a fallen family, came to Sullivan Island, South Carolina, to flee the misery.
Wandering on the island, he discovers a rare bug, made of gold. He uses a piece of paper to take it. At night, he draws the bug on this same piece of paper, as he is explaining the adventure to his friend Edgar, standing in front of the fireplace.
As William takes back the paper, he realises that symbols appeared on it. It must be an invisible ink, revealed by the heat. From that moment, William thinks it is a Pirate’s document: Captain Kidd’s coded instructions to his hidden treasure… Help William find it!

Find the Queen's jewels!
D'Artagnan leaves his native Gascony to join the Royal Guard of the musketeers in Paris! The journey promises to be eventful for this young and impetuous adventurer. Along the way he meets Athos, Porthos and Aramis, musketeers of King Louis XIII.
United by strength, these 4 protagonists set out together on this adventure. Pit your wits against the Machiavellian plans of Cardinal Richelieu, find the Queen's diamonds and save the honor of France…

Travel in various times, in extraordinary places, to find all the pieces of the Time Machine and to restore the order in the space-time!
Devastated, Professor George Einwin committed suicide. The day before his death, his young assistant Filby Young had met him. Full of guilt, the Professor claimed to have activated a chain reaction of uncontrollable events that would destroy the humanity and would leave the Earth close to the end...
To know the reasons of his death, Filby goes back to the Professor’s laboratory and discovers a strange spherical machine, which seems partially dismantled.
Filby reactivates it and is thrown in time and space, against his will.

You have a comment, an opinion, a query, or a suggestion about one of our games or apps?

Send an e-mail to community@anuman.fr
or
join our Facebook fan page!