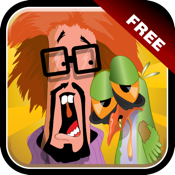 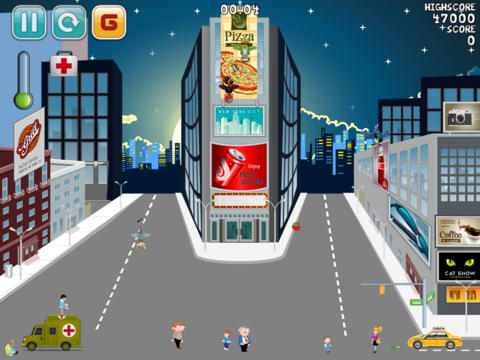 A rare contagious virus has infected the birds worldwide causing them to mutate and become deadly. Major cities of the world are being attacked by formations of these infected birds. The birds are infected with different types of diseases and are dropping sick objects over individual city blocks/zones, with the aim to destroy the entire city. Most parts of the cities have fallen, a few remain.

Governments and leaders across the world have formed a Doctors task force to launch an attack on the birds. Using hospital equipment, they have made a launching device and positioned it on ambulances destined to reach areas of mass infection. The Doctors Task Force plans to launch themselves at the birds, and use their special skills to destroy the flocks.

In order to progress in the game, the player must destroy all bird formations attacking the city before the immunity level of a city block is compromised. Doctor Powers are activated at random and Players can use this to increase destruction of the bird formations. While doctor powers can annihilate the mutated birds the random availability of First Aid Kits also allows the players to ensure the immunity level of the citizens in their cities is increased and chances of the birds infecting and destroying the population is limited.

Meet the Good Samaritan doctors who have vowed to protect the cities!

Dr.Clock - A lifetime military field doctor. He has learned how to deal with combat situations. Dr.Clock is always ready to lend a hand or toss a grenade. Dr.Clock will engage the enemy in whatever fashion it presents itself. HOORAH!

The Professor ñ With a doctorate in Ornithology the professor knows the inner workings of the deranged birds mind, or so he thinks. We think his knowledge can save the world and so he has joined forces to take down the birds. He is equipped with his medical journals and his expertise will assist the strategies.

Ivan - The Radiologist - Born ëIvan Budnickí, his medical career is sketchy as records indicate he was part of a secret experimental project called R.I.S.K. His power to emit x-rays from his body makes him as good as a demi-god.

The Surgeon - "Cutter" as his colleagues call him has always been on the weird side. Sued numerous times for excessive surgeries, now he is getting his chance to really CUT LOOSE! He has his reasons to do so. An expert with all cutting tools he can expand his body to three times normal size, more when he thinks of Amy and Edwin who succumbed to the virus infected by the slayer birds.

Dr. Chen - from China, she is a medical doctor who has also been trained in acupuncture and of course martial arts - not good for da birds! Dr. Chen uses her treasure trove of knowledge and expertise with the needles to combine them with her medical and martial arts to save the world.

Get the full version and enjoy new cities and doctor powers.