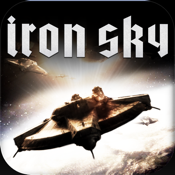 Get the dark universe of the movie blockbuster IRON SKY with a lot of twisted and dark humor right onto your iPhone or iPad now!

Including original movie soundtrack by LAIBACH!

Get Ready, The Fourth Reich Is Here.

Board your space craft, load your ammo and go on your final mission to finish the German henchmans Klaus Adler and Wolfgang Kortzfleisch. But only with uber-awesome skills and sturdy cannon fire, you’ll be able to stand up to assault these Aryans and save mankind from the worst dystopia ever!

Your ship flies right over the United States of America. You’ll pass the Statue of Liberty while you’ll fight hordes of UFO-squadrons, monstrous, fascists zeppelins or dangerous “war-bells”. Rise above the burning city into a hazardous air fight in the clouds, the towering inferno of shooting flying SS saucers all around you. Prevent the Germans of laying our mother earth in ashes and ban the Reichsmacht of becoming the uber-power in a very dark future!

Only with an unheard flight performance and a fast trigger finger you’ll be able to break the fascist to pieces and defeat their ultimate victory once and for all! The meteor blitzkrieg has begun. From now on, you’ll give laser shoots for laser shoots.