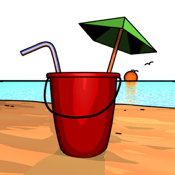 'uDrink' is THE partygame app for your iPhone, iPod touch or iPad!
It connects funny elements of popular drinking games like "I never…" and "waterfall" and refreshes with exciting little games and lot of action cards!
"Talk with a russian accent for 2 rounds", "Call your exboyfriend / -girlfriend" or "Give the player to your left a lapdance" are just a few of many, many tasks you get to do playing the game, which guarantee you a lot of fun!

Try 'uDrink' now and enjoy an unforgettable night with your friends!

How the game works:
In turn every player unfolds one card at a time which tells everybody what to do. The game consists of 13 different types of cards, that are balanced for maximum fun and can be turned off in the options if necessary.

Subject - The player who unfolded this card, makes up a Subject, e.g. 'automobile brands'. Now every player in order has to think of a term matching this subject (e.g. Mercedes). The first player who can't think of a term anymore, has to drink.

Rule - The player who unfolded this card, can make up a rule. If someone forgets to follow the rule, he/she has to drink.

Lucky no. 7 - Everyone starts counting up in order (1,2,3...), with each player only saying one number at a time. If a player gets to a number, that has a 7 in it, that is divisible by 7 or its digits add up to 7, the player has to clap in his hands instead of saying it - otherwise he drinks. Every time that some claps in his hands, the direction changes.

Spin the bottle - The player that the bottle points on has to drink a sip.

I never… - The player who 'unfolded' this card, reads out the statement. All players who did do what it says on the card, have to drink a sip.

Action! - The player who unfolded this card, has to perform the action on it. If he won't do it, he or she has to take 5 sips.

The last sip - In turn each player can remove 1, 2 or 3 'sips' from the bucket by pushing the corresponding number. The player who removes the last sip, has to drink.

Color confusion - The player who 'unfolded' this card, picks an opponent and starts the game. The goal is to push the bucket with the correct color first. If the word in the center matches its color, the bucket with the same color has to be pushed. If the word in the center doesn't match with its color, the bucket of the third, remaining bucket has to be pushed. The player who has collected 3 points wins the game. His opponent drinks 2 sips.

Distribute x sips - You may distribute the amount of sips to one or more players.