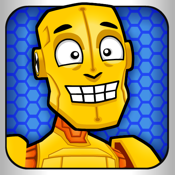 Love cars? Love smashing robots with cars? Then CRASH is the game for you!

A computer virus has broken out at the car crash testing facility! The crash test dummies and other robots are infected with the computer virus and are running crazy! You must launch cars at the attacking robots to knock them out before they take over!

CRASH is a survival shooter where cars are your main weapons. Launch cars like missiles at the oncoming robots before they take over the facility! Upgrade from the Standard car launcher to the super fast Nitro launcher or send cars flying through the air with the Gravity Jump launcher. If the robots get too close, you’ll have to use your close range weapons (Tazer, Pulse or Vortex) to fend them off. Destructible items, multiple level configurations and lots of different robots to destroy make for hours of fun!