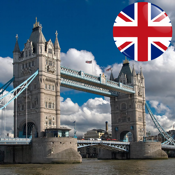 What is the name of the mountain you can see in the distance? What are the lakes you see in front of you? Point there with In Sight UK and you'll see on the screen what they are called.

See what's near you where you travel in the UK: Mountains, Lakes, Places, Buildings, etc. You don't even have to be nearby UK: You can manually set your location to a place in the UK to pretend you are there. Decide if you want to see places nearby, or famous cities around the world.

Works everywhere: By the sea, in the mountains, in the city. Without the internet, without coverage.

Turn the phone sideways to view on the camera screen the places that are nearby. Take a picture of what you see, and send it by email, or post it on facebook or twitter, directly from the App!

You can also add your own places!

All data is built into the App, so you don't need internet. You only need internet when you use the map or send a picture on email or post it on facebook and twitter.

Select between the following map types: Standard, Satellite and Hybrid.

In Sight UK relies on the compass and GPS of your device. Best results are achieved if you are outside.

The facebook integration requires iOS 6 or later. Select settings on the home screen, and look for the facebook icon.

The twitter integration requires iOS 6 or later. Select settings on the home screen, and look for the Twitter icon.

Note: If your device don't have a built-in compass, you cannot see the places as camera overlays (3rd generation iPod touch, iPhone 3G or older models). You can still see the places in lists and on the map.