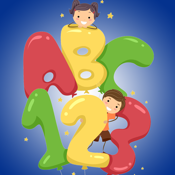 With Easy ABC 123, you can use your iPad as a tool to help your K-5 children practice their math and spelling skills. Looking to give your child an extra boost during the foundation of their education? Easy ABC 123 makes it fun. Do you enjoy participating one-on-one in your child's learning? Easy ABC 123 can be used independently or with a parent. The 77 beautiful pictures spur curiosity of the world around us. The positive feedback and awards system makes the most trying math learning fun.

- Designed for K-5 level education.
- Includes spelling games and math games.
- Parent-child or solo play.
- Beautiful Retina graphics!
- Child safe: no links, no advertisements.
- Fill in the blank type games designed to make learning fun!
- Lots of positive audio and visual reinforcement.
- Awards section for achievement collection.
- Intuitive interface that looks stunning in portrait or landscape.
- Fun songs included.
- Spans from toddler to 5th grade levels.
- The letter, number or math operator is spoken to the child by a real Mom whenever they touch it.
- Turn your iPad into a learning tool.

Letters 1: The first level of letters uses short words to represent each letter of the alphabet. There are stunning photos bring the words to life!

Letters 2: The second level of letter recognition travels through the alphabet including medium length words. You should see these pictures!

Spelling 1: An introduction to spelling. The first letter is missing from a word. The corresponding picture is shown. Your child selects the letter to fill in the word. Words start easy and in alphabetical order and get slightly more difficult after each correct answer.

Spelling 2: A gradual challenge, this game is similar to Spelling 1, except the first letter is visible with a missing letter elsewhere in the word.

Spelling 3: Slightly more difficult, Spelling three displays the first letter, and the child selects the rest of the letters in the word.

Spelling 4: A full spelling game. A picture is displayed and blank underscores mark the letters needed to spell the word.

Letters Free Play: You and your children can spell together. Drag letters from the bin to spell words. I disliked not having enough letters to spell my daughter's name! I love that there is an endless supply of letters so we can spell any thing we want to!

Numbers: A simple introduction to numbers and counting. Numbers 0 through 10 are displayed. When the child touches a number, a corresponding image of a woman's hands showing that number appears.

Addition: This game displays addition problems to solve. The answer is hinted with color coded underscores that correspond to the number of the answer. The problems go from 0 + 0 to 12 + 12, but start off with lower numbers. There are awards for 3 and multiples of 5 in a row, so 3, 5, 15, 20, and so on. There are also awards for solving 5, 10, and 20 addition problems.

Subtraction: Same as addition except with subtraction. This game is designed so there is never a negative answer (such as 3 - 2 = -1).

All Math: Addition, subtraction, multiplication and division problems all mixed up.

Calculator: A fun way to introduce a child to a calculator, an indispensable tool for the modern world. The child drags the letters and operators to the play area,and when the equal sign is drug, the answer is calculated. For example, drag 2 x 3 = and 6 is displayed.