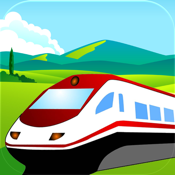 Finds hidden train tickets that slash the cost of walk-on train fares. For example, if you’re travelling from London to Manchester and the train stops at Crewe, it’s often cheaper to ‘split your tickets’ and buy from London to Crewe, then Crewe to Manchester.

So you travel on the SAME TRAIN at the SAME TIME but pay less for it.

This free app quickly finds which station to split tickets at to save for UK train journeys. This trial version currently only covers same-day single fares – we hope to expand to returns and advance tickets later.

If you’re wondering why this works, it’s because train fares and logic go together like Coco Pops and ketchup.

Once the app’s told you what the cheapest tickets are, just go to the ticket office (not a ticket machine) and ask for the separate tickets in the results. There is no problem making this request – you can buy tickets for any route at any station.

– Anything to watch for?

The train MUST call at all the stations you buy tickets to and from. They could ask you to get off the train and back on it again, but we’ve only ever heard of this happening once.

Be careful split-ticketing at stations where you change trains. If the first service is delayed, you may miss the next one.

Non-advance fares listed in this tool shouldn't specify a certain train. But if you purchased an off-peak ticket that requires you to travel at specific times of day, and the delay takes you outside that, you'll have to pay again.

– Can I split advance tickets?
Yes, advance tickets are normally cheaper than same day walk-ons – and the savings can be enormous. We don't currently cover them in this app's trial incarnation. As a tip, try finding what station you’d do the split at for a walk-on fare, then get a price for doing the same split with an advance – it's often similar.

We hope to be able to bring advances to you in the future (though it's more complex, as there are many options). For how to do it, see www.moneysavingexpert.com/trains.

– Does it work with railcards?
Yes. After all, you're just buying normal tickets – provided your railcard is valid on them (do check), there's no problem.

– Why is it TicketySplit Lite?
This is a three-month trial of the technology and is currently free. However, every time you search, we have to pay.

Frankly, we have to see how popular and well used it is. We're willing to foot the bill up to a certain level; beyond that we'll have to do some careful thinking. We called this 'Lite', so you'll know it may change.

– Can I get the full version?
Not yet - we will let you know if it happens. Please see 'why is it TicketySplit Lite?' Keep in touch via the Martin’s Money Tips weekly email at www.moneysavingexpert.com/tips

– How does the app make money?
Quite simply, it doesn't. MoneySavingExpert.com is all about saving you money. This app is likely to cost us quite a chunk, but we thought it worth doing. If it's very successful and thus costs us a packet (we pay each time you search), we will need to look at how we can fund it.