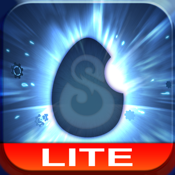 DOFUS: Battles is back!

With an average rating of 4.5 out of 5, and 300,000 downloads from the App Store, DOFUS: Battles certainly scored high with you… So why not check out the brand new sequel? Set in the same world as DOFUS, multi-award winning MMORPG played by millions worldwide, the new instalment in this “science friction” adventure is sure to make the grade!

DOFUS: Battles 2 is based on the same concept as DOFUS: Battles… but backwards.
Say goodbye to Tower Defence gameplay and get ready for Tower Attack!

This time around, you’ll play as Jeff Stobbs, your old enemy, who finally managed to free himself from Naz T Peasawerk’s demonic hold.
Tame the World of Twelve’s monsters to form an army and use Jeff’s new invention, the Slablet, to send them into battle and defeat your foes.

Your enemies are in position, and so are their traps. They’re ready for battle… Are you? Prepare your strategy, line up your waves of monsters and march forth!