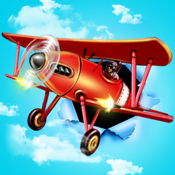 *****"App Store has a lot of adventure games, but it won’t be easy for you to find an engaging game that suits kids. Only a few of them worth even a try. Let me introduce an impressive new game today...." ...alphadigits.com*****

Fly with the gyroscope and fight the enemy. Shoot down airplanes, bomb the tanks and the artillery, get missiles and blow up everything, escape the ambush by looping out of trouble....this flying, adventure game has it all.

aPilotsQuest is the new fun, flying game everyone is talking about.

Starting out in a WWI double decker, you will be able to collect coins from shooting down airplanes and other enemy characters appearing on the journey.

The coins can then be used to upgrade the airplane and get new weapons.

“Being able to create sounds and hear my own voice in the game when playing, was really cool”, says twelve year old test player Marcel.

With multiple missions, un-lockable weapons and cool graphics, this will be the game that you can’t put down!

First you learn to dominate the skies over the rolling hills of the beautiful countryside, where you will meet different enemies in the sky and on the ground….Are you a good enough pilot to conquer these dangerous lands?

Fly through the countryside searching for enemy aircraft… Shoot them down and collect coins and use them to buy new weapons or change planes!

Record your own battle cry or let your partners know you’re going down! With a-pilots-Quest you can determine what your bombs or machine guns sound like. Surprise your friends and invite them to play!

Face new challenges at every turn… You’ll be shot at from every angle, but with a-Pilots-Quest’s iOS gyroscope and accelerometer you’ll have the tools to control the airplane fluidly and efficiently. Find out if you’ve got what it takes to outsmart the enemy!