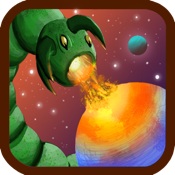 "The simple game play and the impressive design combine together to create an enjoyable experience for players of all ages and types." - Apps on Tapp

"Awesome and has come back value:)" - iGamesView Team

"It’s easy as heck to jump in and play, and provides a heck of a challenge in true iOS puzzler fashion." -TouchGen

"A fun and colourful super simple to pick up and play Snake like game for all ages to just jump in,or rather get your finger in and play." - iPhoneGamerUK

"it feels every bit as potentially time-sapping as Snake, such is the strength of the idea behind it." - 148apps

UPDATE: ...and these folks didn't even review 1.1 which is coming around the corner with boss fights and other awesome improvements!

The Rules are simple. Eat the planets of the solar system from smallest to largest not letting the bigger planets hit you. Once all the planets are done you can eat the sun making a wormhole to the next feast!

Use your finger to guide the worm around the solar system. It is attracted to your finger, so lead the "little fella" around.

Watch out for dangerous and helpful comets as they fly around the solar system. Some are bound for the sun and will cause a dangerous radiation belt to be released. Other comets give you special abilities.

- Tons of solar systems for your enjoyment! (45 currently)

- 3 star rating for each solar system to measure your skill