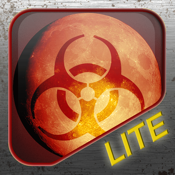 "Players looking for something immersive, challenging, look no further!" 148Apps

Operation: Eradicate is a unique cooperative turn-based strategy game that pits your wits against the zombie hordes.

From the ashes of the last global war, a new threat rises that threatens all people. Calling them the 'Infected One' or just plain Zombies matters little if they kill us all.

WHAT PEOPLE ARE SAYING

"Board game fans will have a lot of fun!" SlideToPlay.com

"It is a unique challenge, quick to learn and difficult to master."

NOTE: FREE Version has no Game Center Matches, and only two Commanders to control.

Join the crusade alone, or enter a Game Center Turn Based Match and play with others world wide.

Control any of five different commanders, all with unique abilities, to rid the world of the plague slowly dying monsters. It is your against the masses. Race to decimate the hordes before they overwhelm the planet.

Purchase Full version to play matches with two to four commanders on three different difficulty levels (including the No Hope! Challenge).

Optimized for the iPad and iPad 2.
High Res graphics for iPhone 4 and 4S (and 4th gen iPod)

NOTE: iPod/iPhone shoppers, zoom and panning coming in next update!

Also note: Also playable on the iPhone 3G(3GS) and 3rd gen iPods (though with less clarity).

Currently on in English. Plans to translate coming soon!