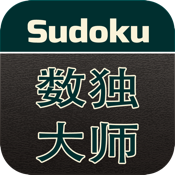 Fun sudoku, there are many humane features, allows you to do problems when handy.

four color pencil, the answer can distinguish different stages of recovery when convenient to choose the wrong.

three prompts are free to choose whether to enable.

over 10 million different difficulty of the subject.

save progress at any time.

According to legend, the number of independent sources from the Latin square Latin Square, and development in the United States in the 1970s, changed its name to the digital puzzles (Number Place), spread to Japan and to flourish, published a mathematical puzzle game jigsaw puzzle. In 1984 a game magazine "パ, ズ Hikaru communication ni コ リ officially named it number of independent, meaning only one number in each cell". ,
Small squared of the nine 3 × 3 grid of 9 × 9 grid of the direction pad, and provides more than 17 figures [1]. Based on these figures, the use of logic and reasoning to fill in the figures of 1-9 in the other spaces. Each number can appear only once in each of the small squared each number in each row, each column only once. , This game only requires logical thinking ability, and has nothing to do with number crunching. Although the play is simple, but the figure the arrangement of the ever-changing, so is a good way to exercise their brains.