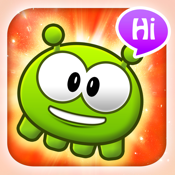 Protect your planet from attack of Cute EyeMons~~ !!


How to
Can proceed to next stage only when the goal score is reached.
Can hunt EyeMons by double tapping them.
Combo accumulates when you accomplish the stage Quest.
Accumulated combos multiplies the scores you get (2x, 3x, 4x, ...)
Use items to achieve high scores.
Buy items using Stars you get in the game.

Rankings
Check the scores of your friends via Facebook and try to win the race !
Check your World Rankings via Game Center.