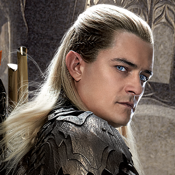 Become an Elf: customize your ears, hair, clothes and even wear the crown of Thranduil to become one of the Elves from "The Hobbit: The Desolation of Smaug." Once your transformation is complete, share your image on Facebook, Twitter or Tumblr.

From Academy Award®-winning filmmaker Peter Jackson comes “The Hobbit: The Desolation of Smaug,” the second in a trilogy of films adapting the enduringly popular masterpiece The Hobbit, by J.R.R. Tolkien.

“The Hobbit: The Desolation of Smaug” continues the adventure of the title character Bilbo Baggins as he journeys with the Wizard Gandalf and thirteen Dwarves, led by Thorin Oakenshield, on an epic quest to reclaim the Lonely Mountain and the lost Dwarf Kingdom of Erebor. In theaters December 13.