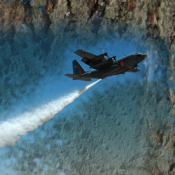 Fight a raging forest fire from the air.

Drag a straight line path for the air tanker to follow. When the tanker is over the fire tap once or more to release the retardant.

Contain the fire and put it out, don't allow structures to burn.

Tankers will run out of water and have to go refill. Keep an eye on the plane's status indicator in the top left.

Three difficulty settings and a choice of dropping retardant or water.

This game was designed for BlazeJam 2012 in an effort to raise money for the recovery efforts following the Waldo Canyon fire near Colorado Springs, Colorado. The game was conceived and written by independent developers from Denver and Colorado Springs in 48 hours and then refined over the following week.

If you enjoy the game we would appreciate if you donated $1 to BlazeJam at blazejam.com which will accept donations through the end of 2012. Donations go to Pikes Peak American Red Cross and Care and Share Food Bank for Southern Colorado.