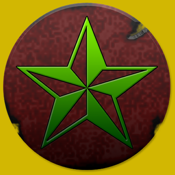 ** FEATURED ON PLAY FIRST PAGE **
Reviews
- "Armored Defense II is a great tower defence game, it might even be one of the best, it looks great and has even more features than I’ve mentioned here such as dropping bombs and laying mines." Mark Dell
- "It’s very rare that you’d encounter a tower defence type of game that is as detailed, well designed and developed as Armored Defense II". Arnold Zafra

Armored Defense II is the first strategic Tower Defence game, a surprise from start to end. One of the best Tower Defence games in terms of quality, realism and game play.
Your mission is to defend your territory from the hordes of armored vehicles that try to invade it by strategically deploying defense towers on the elevated sectors of the terrain. You can also put minefields in critical paths to slow the enemy’s tanks. And even build railways which Anti-tank towers can travel on to reach zones of hard coverage. In a tight spot? Call in air support to devastate a particularly contentious area.

• BIG maps (much bigger than average TD maps: 640x1920 pixels = 6 to 8 times a "normal" map) with 3 levels of zoom
• Railways for towers: anti-tank towers are great on them
• Bombers to devastate land areas
• Minefields, a special tower type that slows attackers

• Stealth, the capacity to disappear from your towers' radars during the hardest times
• Speed Boost, activated in critical situations generating a speed increase for several seconds.
• Self-Repair, allows vehicles to repair damage in march
• Anti-missile, protects tanks from tower missiles
• “The Tortoise”, an extra layer of armor that protects the main chassis of armored vehicles

- 3 difficulty levels and 3 military careers to engage in 5 different scenarios: thousand of missions and hundreds of hours of fun!

- Over 40 achievements, you can win virtual money (TD$) unlocking achievements. Invest your TD$ in defense towers to protect your home.

Tip: play the Training Camp to test your Tower Defence strategy with towers and tanks

VERY IMPORTANT - If you have some issues, please email me , I will respond all the queries.