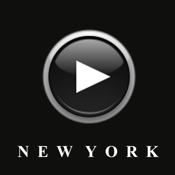 If you like New York City, you will love New York Radio Live. No need to download or synch your songs. Listen to music and news radio stations live using your WiFi or data connection.

New York Radio Live has a simple intuitive "car radio style" user interface with over 30 great New York and metropolitan area radio stations, even some TV audio streams, and more great stations will be added in future releases. It supports multitasking and can play radio stations in the background. Custom stations can be added as well.

Bluetooth supported: You can send audio from this app to your Bluetooth speakers.

AirPlay/Apple TV supported on iOS 7: On your iOS 7 device, go to AirPlay and choose your Apple TV. You do not need to enable Mirroring. Then play a station from this app, and the audio will be sent via Apple TV.

Let us know what your favorite radio stations are, and if they are not already included, we will try to include them in future releases.

Note that this app only connects to the radio streams already available on the internet and it does not create or broadcast any content. A radio station may choose to remove its stream from the internet temporarily or permanently. Certain sporting events may be blocked by the broadcasting station.

NEW YORK GIANTS, NEW YORK JETS & BUFFALO BILLS: We have added a special stations to provide live coverage of football games, if a station providing such coverage is available during the games. To update station streams, touch the small "Update" icon in top right corner of the radio label.

CHECK OUT OUR OTHER RADIO APPS:

Q: WHERE IS THE LIST OF STATIONS TO CHOOSE FROM?

A: Touch the label just below a numbered station button (1-6) to see the station list.

Q: HOW CAN I ADD A CUSTOM STATION?

A: Touch the "Custom" icon at the bottom left of the radio app. Then enter the URL of an audio stream of a station you want to add for any station A through F. You can search for station stream URLs (usually ending with .pls or .m3u) on the Internet. For example, stream URL of WABC AM station may be one of the following:

After entering the URL, touch "Save". Then you can select that custom station from the station list.