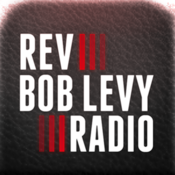 The Rev Bob Levy Radio app provides access to the After Breakfast Show audio, feed links, stories and comments being discussed on air. Soon to come will be Bob's Webcast show along with new functionality and features.

"The Reverend" Bob Levy is an American stand-up comedian and radio personality who is most well known as the host of the comedy roasts and frequent guest on the Opie and Anthony Show as well as the Howard Stern Show, co-host of the Miserable Men show on Howard 101, and stand-up comedy performances on the Killers of Comedy tour.

Use app in the background if you want to listen to the show while checking e-mail or doing other tasks. Also checking with show show news feed to stay up to date on stories being discussed on air.

*Be aware that apps running in the background such as playing streaming audio will continue to use battery.