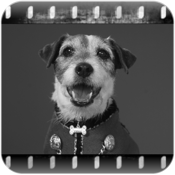 The official Uggie app is here! To celebrate the phenomenal global success of the multiple-award winning black and white movie The Artist, we’re bringing you the chance to have your very own Uggie app for the first time.

The little dog with the big heart captivated movie goers around the world in the silent film that took everyone by surprise. The Artist won three Golden Globes, seven Baftas, six Cesars and five Oscars, but it was the scene-stealing canine sidekick of Best Actor Jean Dujardin that really set tongues - and tails - wagging.

This remarkable ten-year-old Jack Russell who was once destined for the pound, not only received the coveted Palm Dog in Cannes but was the first to be honoured by having his pawprints set in concrete on Hollywood Boulevard. He was also awarded the prestigious Golden Collar and his very own Pawscar for his amazing acting abilities.

The world’s most famous hound has already barked his memoir to a celebrity biographer, published internationally in October 2012, but now dog lovers everywhere as well as fans of The Artist can have their very own all-action Uggie app.

- Black and white 1930s film reel style
- Exclusive HD video footage of Uggie performing 10 separate tricks
- Easy to navigate features including ‘Next Trick’ and ‘Play Again’ buttons
- A gallery of 70 colour photographs, many never before seen
- A musical soundtrack in the 1930s style
- One-click links to Uggie’s Twitter and Facebook feeds
- Specially recorded film of Uggie at home reviewing his manuscript
- Amazon links to Uggie’s memoir The Artist: My Story and the DVD
- Fun feature using own photo or taken from camera roll to superimpose on the faces of either a dog, a man, a woman or a child sitting alongside Uggie
- Share photos on Facebook and Twitter pages or via email with the caption “Licks, Uggie x”
- Invite your friends to play with their own photos or those of their dogs
- Minimal text for universal use
- Retina Ready

To Come:
- Frequent updates of photos and clips of Uggie as he embarks on a worldwide publicity tour
- Uggie-isms, as tweeted or posted on Facebook
- Exclusive sneak peeks of what Uggie is up to next
- Dog training tips from Uggie’s owner and acting coach Omar Von Muller

• “Uggie’s right up there with the big ones” - Harvey Weinstein

• “Uggie inhabits a character and emotional range as evocative as any of his human co-stars….He handily outperforms Leo (diCaprio) in J Edgar though might not measure up to Clooney’s work in The Descendants.” S T Van Airsdale, Movieline editor and creator of the Consider Uggie campaign.

• “That was the best action I’ve had in years!” – Whoopi Goldberg after being kissed by Uggie

• "You have no idea how starstruck I am!” - Gerard Butler

• “Uggie is wonderfully trained and talented. I’d like to see a special Oscar recognizing the achievements of animals.” James Cromwell in The Artist.

• “This dog is a total scene-stealer!” - Miss Pyle

• “Uggie was my shadow and my friend” - Jean Dujardin

• “Uggie was a star. It was a pleasure to work with such a pro. He became very important in the movie – much more than what I expected when I wrote the script.” - Director Michel Hazanavicius