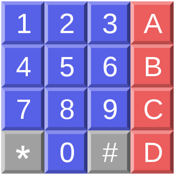 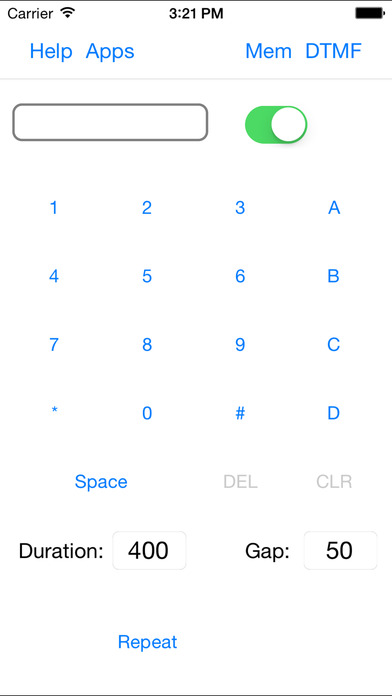 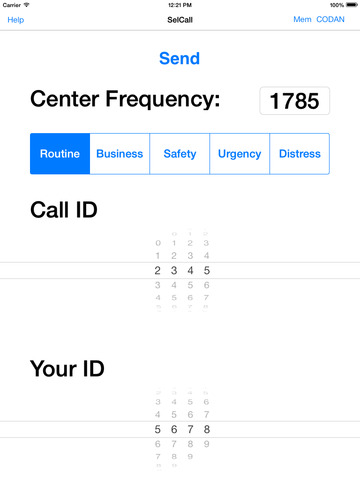 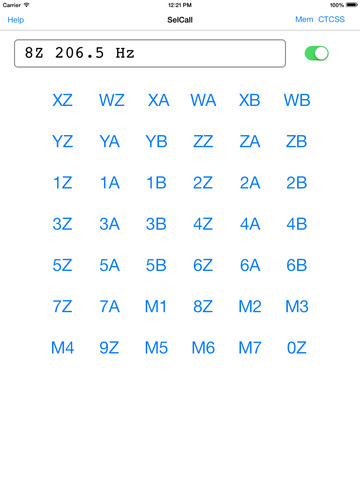 SelCall generates Selective Calling Tones. Select your tone type from the extensive selection of available modes, then touch the button for each tone you wish to send. You can even queue up tones and have them sent in a burst, if you wish. The following tone types can be generated:

Touch the button on the upper right corner to get a list of SelCall tone modes, and select the mode you wish to use.

Then touch the button for each tone you wish to generate.

Any tones that you played by turning the switch on can be repeated by tapping the RPT/Repeat button.

You can also store commonly used tone sequences. Tap on the Mem button to bring of the list of memory entries, which will by empty at first. To add an entry, tap the Edit button, then the green plus sign to add an entry, which will get a default name of Untitled. Tap Done, then tap on the Untitled entry to edit it. You can change the name, as well as the tone keys to be sent. To send an entry, tap the send button. It will be sent (or stored in the buffer if the switch is off). It will also be placed in the repeat buffer, so you can tap RPT/Repeat to re-send it.

The duration of tones and gap between them can be customized for most modes. Enter the values in milliseconds. The maximum allowed values are 500 milliseconds.

In CTCSS mode, touch the button for the tone that you wish to continuously generate. There is a switch which turns the tone on and off, and when on, the tone will continuously play, even when you switch to another tone mode, so you can combine CTCSS with other tone modes.

In CODAN mode, adjust the center frequency if necessary, select the priority of the message, and dial in the ID to call, and your ID. Then tap Send.

Sequence mode allows you to create sequences of arbitrary tones. First, you will see a list of your sequences. You can use Edit to add additional sequences, delete a sequence, or re-arrange them. Three sample tone sequences are created for you, as examples. To rename a sequence, tap on it and edit the text.

To edit to send a sequence, tap on the disclosure indicator at the extreme right. Each sequence is a set of lines, each of which has two numbers. The first is the frequency of the tone in Hertz, the second is the duration of the tone in milliseconds. One second is 1,000 milliseconds. Do not put an additional space between the numbers, after them, before them, or use any other characters, or the sequence will not correctly play.

You can play two tones at the same time, in that case, three numbers must be entered on each line, the first two are the tone frequencies, the third is the duration.

To play a sequence, tap Send.

To edit a line, tap on it and edit the text. You need a single space between the frequency and length. You can use Edit to add additional lines, delete a line, or re-arrange them.