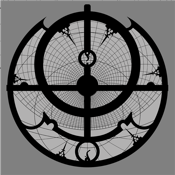 You've never experienced a novel like this. TOC is a multimedia epic about time: the invention of the second, the beating of a heart, the story of humans connecting through time to each other and to the world. An evocative fairy tale with a steampunk heart, TOC is a breath-taking visual novel, an assemblage of text, film, music, photography, the spoken word, animation, and painting. It is the story of a man who digs a hole so deep he can hear the past, a woman who climbs a ladder so high she can see the future, as well as others trapped in the clockless, timeless time of a surgery waiting room: God's time. Theirs is a history of people who are fixed in the past, those who have no word for the future, and those who live out their days oblivious to both.

A novel that uses words, music, exquisite illustration, and animation to tell its story, TOC re-imagines what the book can be. When read on the iPad, TOC retains the intimate, one-on-one experience that a reader can have with a book as it draws on the power of other art forms to immerse readers in an altogether new multimedia story.

TOC has been exhibited in museums, galleries, and stage venues throughout the U.S. and Europe.

TOC is an entrancing digital novel that explores temporality's elusiveness and how, ultimately, the more we think about time, the less we really know about it. Reminiscent of Borges, Calvino, and Ballard, TOC functions less through plot than thesis, less through character than idea. Nothing short of brilliant. --Lance Olsen

With stunning visuals, a compelling and complex narrative, a gripping soundtrack, and a user-friendly but satisfyingly sophisticated interface, TOC is one of the few pieces of digital media that feels fully integrated and profoundly literate. It brings us to the trailhead of the genre's future, and then takes us a good way down the path. --Brian Evenson

...an elegant meditation on the nature of time.... A fascinating look at some of the possibilities of narrative in the multi-media...age....—Ed Falco, American Book Review

...cutting-edge [but] surprisingly easy to navigate...a hard-hitting (and visually and aurally magnificent) rendition of one of the world’s most ancient moral lessons. --Virginia Konchan, ForeWord Reviews

Exploring untrodden paths out of the groove of language, TOC releases us to a different approach to temporality that may also provide a cure for…chronology. --Jean-Yves Pellegrin, Études anglaises: revue du monde Anglophone (Paris).

For full credits and other information visit www.tocthenovel.com