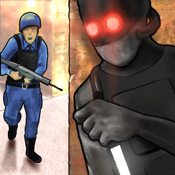 AN ASSASSIN FROM THE FUTURE
In each mission, your objective is to kill the target and escape back to the future. Guards will chase and attack you on sight, complete the assassination before they hunt you down. It's hard to stay alive once you are seen.

USE YOUR SPECIAL ABILITIES
Speed ability makes it easier to sneak around and run away from the guards. Cloak ability is good for hiding and getting out from any deadly situation.

ONE FINGER CONTROLS
Virtual joystick appears anywhere you put your finger on the screen. Double tap to activate speed, tap and hold to activate cloak.

120 ASSASSINATIONS
Stealth Assassin features 30 different level designs and 120 missions. Missions are unlocked based on the success (achievements) in the current ones.

STEALTH IS THE KEY TO SUCCESS
You need to be a real assassin in order to complete Professional Missions and unlock all 480 achievements!

We've got a fun game for you that requires you to complete a super stealth mission and get out before you're seen. The Stealth Assassin app can be played on your iPod touch, iPad, and iPhone and gives you the goal of killing a target and then escaping back to the future.