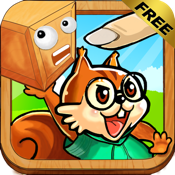 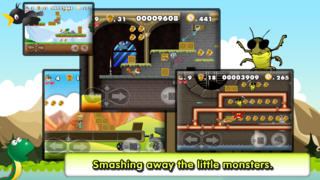 →→ An amazing action game finally available on your IOS. We made it Great. ←←

●Wonderful controls, as if you were playing on a game console.

●Seven levels and nineteen scenes are waiting for you to venture in (more levels to come very soon, free of charge).

●Twelve different kind of monsters and seven big Bosses are waiting for you to kick their asses.

●Support of GameCenter, and 23 achievements are waiting for you to unlock.

Thinking hard about getting more and more delicious nuts, Squirrel Abu finally decides to take a miraculous adventure that is full of danger.

Thus various traps and obstacles have been planted.

Abu will encounter all kinds of little monsters. It is fortunate that Abu, who has zero attacking ability, is helped by brother Box (being forced) along his way, smashing away the little monsters.

It is more horrific that a BOSS is quietly waiting for Abu at the end of each level.

Hurry and join Abu’s Adventure. Be careful You are the best.

●→←↑↓ on the bottom left are the direction keys. →←keys move Abu left and right.

●The keys on the bottom right are for “fetch/throw” and “jump, respectively”

●Use the “Jump” key to make Abu jump up. Press ↓ key and then press “jump” key to have Abu jump to the next step.