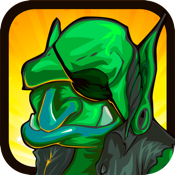 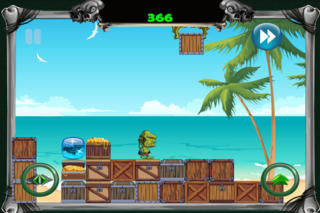 Here’s the story of a fantastic and magical land:

You’d rather be relaxing under a cool tree, but the big monster bosses have called in. They have you jumping through hoops and want their shipments of the best pirate gold right away. If you don’t deliver this booty in time, you will be in trouble. As is, you are skating on thin ice. Without the money, the mob bosses can’t build the super crime hotel and park that they need to raise money for defense of the big battle that is to come with the zombies.

And they have hired you to raise this capital. The problem is that that the best gold is located at the top of the tower, in the dangerous kingdom of Boogly the dragon , and the mechanical pickers that transport your treasure chests are already working overtime while they travel through every village and city. Being so overworked, they might just drop a crate on your head, so be careful!

You are just a tiny pirate, young of age, and your business and mission in this life of crime is to smuggle as many amazing treasure crates out of the dragon lord kingdom as possible. It is best to move as quickly as possible. Run, don’t walk is the motto here.

You can jump over crates, especially with the help of your buddy, the ‘powerup.’ You’ll be racing around in a maze of pirate chests with a small pocket of time to do it all in, shooting for the fastest delivery possible.

But time is running out, and you are on a race to smuggle and ship as many crates as possible before the other monster nations catch up to you. You have to cut every corner possible. But avoid the pitfall of building the stacks too high, or you may get stuck in between them. You can’t kick down the crates or draw strength from some mystical source to overpower and push them around. No, you have to be smart and strategic with their placement.

To ship the crates, you need to stack them like you stack blocks. Stack a full row as you skate side to side and once a full row is completed, ship them off across the ocean water. Something tells you that you better be fast, or the monster mob will be paying you a visit.

You may draw a conclusion that this fun adventure story is too ridiculous to be a reality, but its true.

Tiny Pirate Smuggle is a free puzzle and strategy game that the whole family can enjoy. Both boys and girls, and all kids and adults alike will have a blast.

Get the family together to shoot for the highest score in this addictive app. This game with amazing HD graphics will have you going into a thumb tapping mania, as you try to control where your pirate monster goes.