Shadow of Elves 3: Episodes 7-9. Watch Thalia’s reflection of evil, beetle assault on the Meadowlands and a glimpse of the lost gateway. Activities include: Memory Game, Spot the Difference and Coloring Board. (iPad Version; by Auryn Apps) 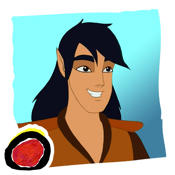 Almost microscopic in size, there exists a world hidden within our own; the Meadowlands is a delicate world of flowers as large as redwoods and insects the size of dragons; where peaceful fairies take wing and comical trolls haunt the low land swamps and inhabit dark hidden caves. Without warning, a shroud of evil is creeping across the land. Deep in the Dark Wood at the edge of the Meadowlands the Elves have built their citadel in a gnarled ancient tree. Their malevolent leader Lord Kann lusts after control of the entire fairy empire and has vowed to conquer every corner of this magical realm.

Episode 7 - Reflection of Evil: When one of Phaedon's magical spells fails, Thalia's reflection in a pool comes to life. The evil double takes Thalia's place. Although the fairies are astonished by Thalia's strange behavior, only Daiman realizes that Thalia is not herself. When Lord Kann tries to use the double to the elves' advantage, the fairies capture Daiman. Thalia's friends are the only ones who can help free her and defeat the evil twin.

Episode 8 - Beetle Assault: In order to enhance their elf cavalry, Daiman and Balabust drive a herd of flying beetles to the Meadowlands. Everyone has great fun, especially as a female beetle falls heavily for Balabust. However, the immense appetites of the bugs have a devastating effect on the flowery meadows. Balabust, disguised as a bug, plays the role of the lead insect to herd the beetles back home.

Episode 9 - The Lost Gateway: When a gypsy visits the fairy village selling starflower bonnets, everyone is intrigued - for varying reasons. Legend has it, that these flowers only grow by the secret gateway to the lost homeland of the elves. The gateway houses the "heart of stone"' a gem of immense power. This stone can open the final gate only if "two warring hearts are blended as one". Upon finding the stone, Phaedon reveals himself as a power hungry traitor, but accidentally destroys the gate, which Daiman and Thalia had opened. Everyone catches a brief glimpse of the land beyond the secret gateway, before it is closed again forever. The power of the stone removes everyone's memories of these events, and Phaedon's secret is safe once more.

★ Match Memory Game: Is a card game in which all of the cards are laid face down and two cards are flipped face up over each turn. The objective of the game is to turn over pairs of matching cards. Game Options:
• 1 or 2 players
• 3 levels – Easy, Medium, Hard
• 3 pack of cards available from the 3 episodes
★ Photo Hunt Game: Also known as Spot the Difference is a puzzle where players must find 10 differences between two otherwise similar images that have been altered with photo manipulation. This app contains 3 layouts from the 3 episodes
★ Coloring: 18 crisp black and white layouts from the episodes that can be painted using bright and relevant colors to pick from. The colored pages can then be saved to library or emailed immediately too.

Please rate and review the app. Your feedback means a lot to us!
Stay in the loop: www.auryn.com
Write to us: [email protected]
Like us: Facebook.com/appsbyauryn
Follow us: Twitter.com/aurynapps and pinterest.com/appsbyauryn