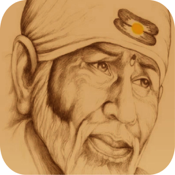 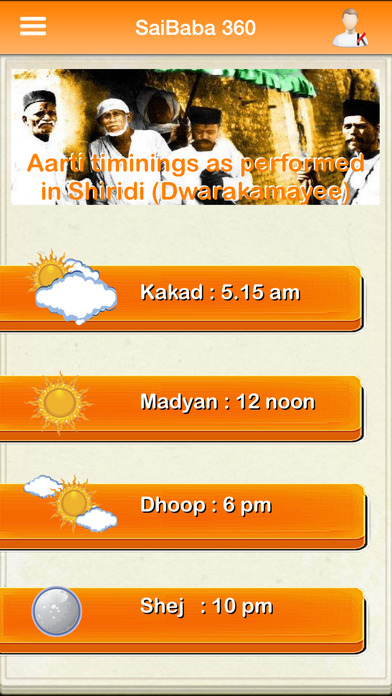 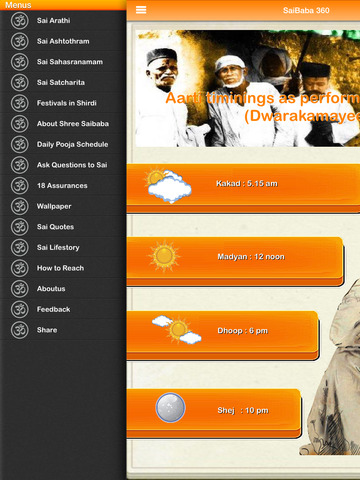 Shirdi Sai Baba was an Indian guru, yogi and fakir who is regarded by his Hindu and Muslim followers as a saint. Some of his Hindu devotees believe that he was an incarnation of Shiva or Dattatreya. Many devotees believe that he was a Sadguru. There are many stories and eyewitness accounts of miracles he performed. He is a well-known figure in many parts of the world, but especially in India, where he is much revered.(SAI meaning Sakshaat Ishwar) - GOD THE ABSOLUTE.

#1 . SaiBaba Arathi app provides all four Arathi's sung every day at dwarakamayee(famously know as Shiridi).added original Marathi lyrics with different languages such as English,Tamil,Sanskrit,Telugu,kannada with each Arathi to sing along by just tapping Globe icon in the top right hand side.

#2 . Sai Ashtothram(108 names) provided with the audio and text to sing along.

#4 . Sai Satcharita(book with all chapters- added iBooks feature just swipe/tap your finger to read read next chapter added zoom in and zoom out for your convenient).

#9 . Sai Photos contains both landscape & portrait (which fits iPodTouch,iPad,iPhone all versions )we can share photos via FB,Twitter,Email.

#11 . Sai Life Story (Tales of Sai) - added iBooks feature just swipe your finger to read read next chapter added zoom in and zoom out for your convenient.

#12 . How to Reach Shirdi Via Railway route and bookings via makemytrip.

#15 . About us & feedback screen to contact and to send feedback.