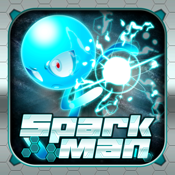 Legendary SparkMan is back! Experience the feeling of extreme satisfaction! Defeat the enemies with the newly-advanced Stick-Mans action game.

"Angry SparkMan" is an easy mini-game played by simply tapping your screen.
It is a chance to play the game for free!!
You can lead "Angry SparkMan" during your break time or when you want to refresh your stressed mind.

Prologue:
SparkMan lives in a beautiful planet. However, many enemies try to invade it. Residents feel scared and were escaping from it.
Therefore, a courageous man must take the challenge. He was burdened with grief and anger of the inhabitants of this planet, he flies into space to be "Angry SparkMan"!

Rankings will be updated as score goes up by defeating the enemies. If TIME runs out or LIFE becomes 0, the game is over.

LEVEL UP:
Level gets higher in every 10 seconds. As level goes up, the more challenging this game will become. Be ambitious as you aim for the highest level!

Special weapon: "ANGRY SPARKING"
This is triggered by pressing the SPARKING button! Annihilate near enemies with cool attack!!