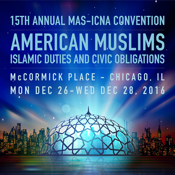 The Annual MAS-ICNA Convention is one of the largest and most diverse Islamic conventions in North America. The convention takes place in Chicago, Illinois every December during the winter holiday season. By the grace of God and the unique effort of over 300 volunteers, the number of attendees has successfully grown from 1,500 in 2001 to 15,000 in 2015.

The Muslim American Society (MAS) and Islamic Circle of North America (ICNA) are dynamic, religious, and educational organizations that offer unique programs and services that seek to better the individual and in turn, the greater society by imparting Islamic knowledge, promoting community service, and much more. With similar goals and missions, both Islamic organizations teamed up to produce two successful conventions every year: the MAS Convention in Chicago, Illinois and the ICNA Convention in Baltimore, Maryland. The ICNA convention has successfully gathered over 20,000 attendees from all around the world.

As a family oriented event, every year MAS-ICNA Convention chooses a theme that fulfills the needs of the Muslim American family. The themes are often categorized in topics of spirituality, activism and knowledge. The MAS-ICNA Convention offers a wide variety of simultaneously run programs for different ages and interests. Lectures for young adults and youth not only teach the fundamentals of Islam but teach them how to implement the teachings of the Prophet (Peace be Upon Him) in their daily lives and encounters. This year's theme is “American Muslims: Islamic Duties and Civic Obligations."

In addition to these lectures, the convention provides various programs including: intensive workshops which are provided to help enhance skills that are necessary for success; a diverse and unique 300 Booth-Bazaar and entertainment sessions which include basketball tournaments, Qur'an competitions, comedic skits, a kids carnival, and Islamic nasheeds (music). The MAS-ICNA Convention is concluded with the main inspiration night which features guest appearances by star performers: Maher Zain, Harris J, Hamza Namira, Raef, Native Deen, Omar Regan, and many more!