Saint Nick and the Space Nicks - An Intergalactic Christmas Tale 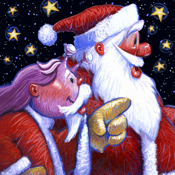 Saint Nick and the Space Nicks is a hypothetical marriage between Clement Clark Moore's ‘The Night before Christmas’ and Dr. Seuss! With Richard Chase Mears smart and snappy writing and Bill’s whimsically detailed illustrations, they have created a wonderful new spin to the traditional Christmas story.

The animated version has appeared every Christmas eve on ABC-TV's World News Now every year since 2005.

32 pages of whimsically detailed illustrations with hundreds of interactive buttons, visible and hidden, that trigger animations, draggle objects and silly sound effects that kids will love!.

'Space Nicks’ tells the story of how St. Nick meets Venick from Venus. Venick is a strange purple creature with long purple hair and is dressed exactly like St. Nick. Venick tells him that while delivering his own toys on Venus he tripped on a star and tumbled from near to afar, ending up lost here on Earth. Fearing he will not be able to complete his task, he asks for help. When St. Nick says yes, a whole new world of Christmas opens up to them.

Follow St. Nick and Venick as they travel through space and meet all the Space Nicks! It’s an adventure you won’t forget and reminds you whenever you’re lost, look to the sky, to the heavens above, there are billions of stars that sparkle with love!