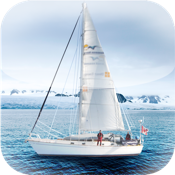 "Dueck’s writing is clear and urgent, with the reader-friendliness of a magazine piece, and his photographs are superb, especially when viewed on a Retina screen."
- Kirkus Reviews

In the summer of 2009, Cameron Dueck and the rest of the crew of the Silent Sound completed a journey made by fewer people than have climbed Mt. Everest; they sailed through the infamous Northwest Passage. These waters are normally locked in ice, but due to climate change it is now possible to sail here for a few short weeks each summer.

Their voyage from Victoria to Halifax carried them through raging storms and mechanical breakdowns and took them into sea ice that threatened to crush their yacht’s hull.

But even more important, it brought them face to face with modern Arctic life in the tiny, isolated Inuit communities where the challenge of climate change is added to the already crushing load of social and economic woes.

Join the crew of the Silent Sound with this interactive journey to the front line of climate change – one that melds video, photography, graphics and maps with the rich narrative of Cameron Dueck as well as interesting facts from the World Wildlife Fund.

- A visual table of contents for quick and easy navigation
- More than 200 images — many full screen
- Interactive maps pinpoint route and location
- Read on your iPad, iPad Mini, iPhone or iPod Touch
- 3D model of The Silent Sound
- More than 30 minutes of documentary footage
- An interactive book cover
- Audio files
- Facts on climate change, including charts and graphs from the World Wildlife Fund

World Wildlife Fund has partnered with The New Northwest Passage App in order to educate and inform users of the global effects of climate change, particularly in the arctic region.

Since 1992, World Wildlife Fund's Global Arctic Program has been working with partners to combat threats to the Arctic region and to preserve its rich biodiversity in a sustainable way.