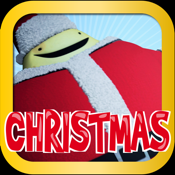 This is an official app of the animated slapstick comedy series Glumpers.
© Motion Pictures, S.A. - TVC

Spend a great time with the games for kids and the funny cartoon videos of the Glumpers! With Glumpers Christmas you and childrens can play to 6 different and amusing cartoon games featured by the characters of the series: Booker, Webster, Gobo, Dudd, Quigly and Fubble. Besides you’ll be able to laugh over and over watching them in Special Winter & Christmas exclusive based episodes of the Glumpers TV series, the new animated cartoon comedy series which is already rolling in the homes of millions of kids worldwide.

Help the Glumpers overcome all levels, share your points in the Game Center and challenge your friends to improve your results.

Be our fan in facebook and be permanently aware of everything Glumpers do! http://www.facebook.com/Glumpers