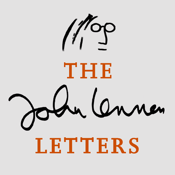 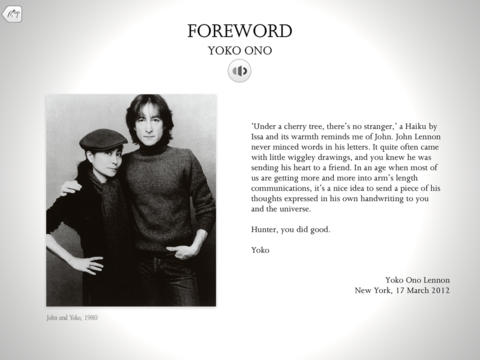 The John Lennon Letters App is a unique collection of the private letters of John Lennon, edited by Hunter Davies, and annotated and contextualised for a global audience of Lennon and Beatles fans. With audio from Christopher Eccleston and links to John Lennon’s music via iTunes, it offers a different but complementary experience to the hardback book The John Lennon Letters published by Weidenfeld & Nicolson.

Features
• 78 letters selected from Hunter Davies’s book THE JOHN LENNON LETTERS (with an additional 10 letters, exclusive to the app) organised by chronology, recipients, themes and exclusivity
• Cast list of characters featured in the letters and exclusive to the app
• Ability to explore highlighted content in letters through annotated contextual panels
• Access to transcripts for every letter for complete legibility, plus supporting notes
• Curated play list of John Lennon music via iTunes
• Reverse tool allowing for postcards to be flipped to see both front and reverse
• Audio of John’s letters, recorded by Christopher Eccleston
• Foreword recorded by Yoko Ono
• Written and audio from Hunter Davies, plus a brief biography of John Lennon pre-1960
• Animated opening-sequence introduction with illustrations by John Lennon
• Link to buy the book on Amazon.com from the app
• Tweet about John’s letters to a global fan base and post content to Facebook from within the app
• Like the app on http://www.facebook.com/thejohnlennonletters, follow on http://www.twitter.com/lennonletters and visit online at thejohnlennonletters.com

About the author
Hunter Davies is an author, journalist and broadcaster. He knew John Lennon well, and wrote the only authorised biography of the Beatles. He remained friends with John and Yoko Ono.

The John Lennon Letters app is created by Haymarket Network, a Haymarket Media Group company. The title is produced and published in partnership with Weidenfeld & Nicolson, an imprint of Orion Publishing Group, an Hachette UK company and publishers of The John Lennon