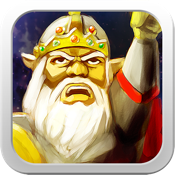 Ages ago, the Creators harnessed the Seven Powers (Air, Earth, Fire, Nature, Water, Chaos, and Light) to fashion magical worlds alive with tribes of magnificent creatures. They bound each tribe to one of Seven Powers to give them fantastic abilities. Proud of their creations, they held the Great Game to determine who had made the greatest tribe.

In SpellBroken, you take control of one of the Creator tribes and face-off against another in the Great Game. Using your tribe's land, creature, structure, and spell items, you must create a new world and overcome your opponent.

We also suggest watching a CPU versus CPU game. This is a great way to get a quick introduction to the many items and behaviors in the game. If you wish to quit the CPU versus CPU game, touch the screen during a CPU player's turn to bring up the Player Controls and select the Exit Button (left most door image) on the top of the screen. This will return you to the title scene.

Sage Dragon values your feedback and strives to provide the best user experience to its customers. Feel free to send us any comments, issues, or enhancement requests using our support link.

Please note: SpellBroken is designed to be played in landscape orientation. You will need to rotate your device after starting the application.